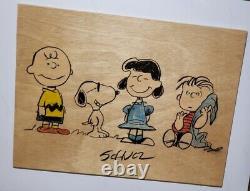 Charles Schulz drew much inspiration from his own life. One of his art teachers was called Charlie Brown and Schulz himself pursued a girl without success, echoing Charlie Brown's failure with his own inammorata, the Little Girl with the Red Hair. The raft of characters produced by Charles Schulz brought Peanuts to the very center of American cultural life. Deceptively simple in execution, they nevertheless struck a chord with people throughout the world.

Original signed artwork done personally by CHARLES SCHULZ of "Charlie Brown, Snoopy as Joe Cool, and the Van Pelt siblings Lucy and Linus". This is one of Schulz's better depictions of the primary characters in his comic strip in one single artwork.

Item is a 12 X 16 (estimated) illustration board (made of wood and 1/4 of inch thick). Have been collecting autographed memorabilia since 1978. Item is guaranteed for life. Will also provide COA with lifetime guarantee. Item was originally owned by Bill Melendez, the voice of Snoopy and a important person in producing the Peanuts TV shows. Bill Melendez was the winner of it and the artwork itself was probably created sometime around the mid to late 1980s. Volunteer Advisor for NY Fine Art Journal for a few years. CoA from "Behind The Beautiful Canvases". Check out the website online for "Behind The Beautiful Canvases". The Original two proprietors of this site together have roughly 50+ years experience in the art industry as advisers for both the San Francisco Cartoon Art Museum and Park West Gallery. Behind the Beautiful Canvases has consulted with many in the past including. San Francisco Cartoon Art Museum.