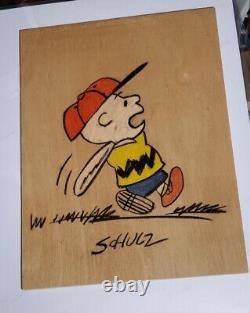 But Schulz's pearls of wisdom struck a chord throughout the world. Peanuts appeared in 2,600 newspapers in 75 countries and was adapted for 40 television shows, 1,000 books and countless items of merchandise including toys, T-shirts and mugs.

Charles M Schulz was born in Minneapolis in 1922 and, after serving in the Army in the Second World War, learned cartooning by correspondence course. His first feature, Li'l Folks, was eventually syndicated throughout the United States after being, to Schulz's dislike, renamed Peanuts.

Charles Schulz drew much inspiration from his own life. One of his art teachers was called Charlie Brown and Schulz himself pursued a girl without success, echoing Charlie Brown's failure with his own inammorata, the Little Girl with the Red Hair. The raft of characters produced by Charles Schulz brought Peanuts to the very center of American cultural life. Deceptively simple in execution, they nevertheless struck a chord with people throughout the world. Original signed artwork done personally by CHARLES SCHULZ of "Charlie Brown". This is one of Schulz's better depictions of Charlie Brown in his baseball attire. Item is a 12 X 16 (estimated) illustration board (made of wood and 1/4 of inch thick).

Have been collecting autographed memorabilia since 1978. Item is guaranteed for life. Will also provide COA with my guarantee.

Item was originally owned by Bill Melendez, the voice of Snoopy and a important person in producing the Peanuts TV shows. Bill Melendez was the winner of it and the artwork itself was probably created sometime around the mid to late 1980s. Brief Summary of Myself : 1. Volunteer Advisor for NY Fine Art Journal for a few years.